How Common are White Grubs in Lawns in Colorado?

A white grub is the immature larval form of a scarab beetle, such as a European chafer or Japanese beetle. Grubs live in the soil, feeding on plant roots, so damage caused by grubs may not be noticeable until after severe lawn damage becomes prevalent.

Due to our hot and dry climate of Colorado, white grubs have not been very problematic. Since 1997, Organo-Lawn has seen and treated only 75 cases of white grubs. That being said, the last two years lawn grubs have been more problematic. The reason for the recent increase in grub activity is because more and more homeowners have irrigated lawns. Adult beetles lay their eggs in lawns during the month of July and they will only lay their eggs in lawns that have wet soils. In Colorado, July has always been a very hot and dry month and most lawns would dry up and turn brown during the egg laying season. With irrigation the lawns are staying wet, even during hot and dry months like July.

Until we have major a major drought with watering restrictions, we expect to see more grub problems affecting lawns in Colorado every year. If every homeowner in Colorado would water their lawn according to the 1-2-3-2-1 lawn watering technique the grub problem could be eliminated. Unfortunately, too many homeowners water their lawns every day of the week, which is extremely wasteful and gives the Japanese Beetles a moist place to lay eggs. Without irrigation Japanese beetles would not be able to survive in our extremely dry and arid climate. 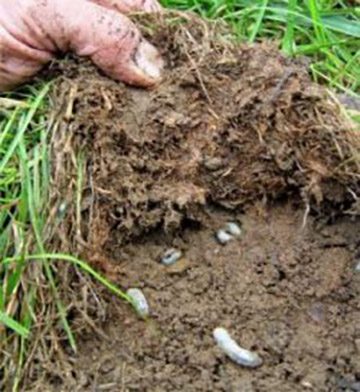 Due to the hot and dry summer months and low humidity insect damage from white grubs is not very common in Colorado; however, with more and more houses using irrigation lawn grubs are becoming more prevalent in the Boulder and Fort Collins areas. White grubs in a lawn can be easily prevented by allowing the lawn to dry out in July when the grubs are laying eggs into the soils. Homeowners that follow the 1-2-3-2-1 lawn watering technique will not have grub infestations in their lawns.

There are two reasons why lawns that are treated organically by Organo-Lawn almost never suffer from grub infestations. The main reason is because Organo-Lawn insists that all their customers water their lawns according to a very specific watering schedule.

How to Prevent Grub Damage by Watering the Lawn Properly?

Adult beetles lay their eggs in lawns during the month of July. If the soil in the lawn is dry the adult beetles will chose a different location to lay their eggs. The reason for this is because the white grub eggs die quickly if they dry out.

Organo-Lawn’s recommends a special technique for watering lawns called the 1-2-3-2-1 lawn watering schedule. Not only is this the ideal way to water a lawn but it also the perfect organic grub control. This special watering technique allows the soil to dry out between lawn watering. Therefore, if the adult Japanese beetles lay eggs in a lawn that is being watered by the 1-2-3-2-1 technique, the lawn grub eggs will dry out and die.

The adult beetles prefer to lay eggs in lawns that are being watered daily where the soil never has a chance to completely dry out. Unless it rains almost daily during the month of July or the lawn is being watered improperly, the lawn grub eggs will not be able to survive a dry soil.

How does Bacteria in the Soil Kill Lawn Grub Eggs?

The second reason lawns cared for by Organo-Lawn rarely have white grub problems is because there is a beneficial bacteria called Bacillus popillae-Dutky that kills grub larvae. Organo-Lawn’s lawn care programs are designed to build a living soil. Soils that are teaming with beneficial bacteria and nematodes. will sustain the presence of bacteria Bacillus popillae-Dutky, which will kill the grub larvae. This lawn in Boulder was attacked by white grubs. It is easy to tell if a lawn has a grub problem because the grass will pull up easily like it is a newly laid piece of sod.

How to Kill Grubs In a Lawn After Damage Has Occurred?

If you are one of the unlucky homeowners and your lawn is damaged by grubs, Organo-Lawn recommends a special insecticide treatment called Acelepryn. This grub control is not organic but it is on the EPA’s reduced risk list.

Including the lawn grub treatment Acelepryn, we always recommend an inspection of the sprinkler system to make sure the lawn is being watered according to the 1-2-3-2-1 lawn watering principals

What is the Life Cycle of White Grubs in a Lawn? In late May through early July, the Japanese beetle adults emerge from the ground and begin to search for food and mates. Adults Japanese beetles can fly as far as one mile and feed on a multitude of plants; their favorites include roses, grapes, and linden trees. The younger scarab beetles may go unnoticed at this time because they are not attacking ornamental plants.

In July, female beetles spend 2–3 weeks laying up to 60 eggs each in the soil. Depending on soil moisture and temperature, lawn grub eggs hatch about 2 weeks later. During this time white grubs are very small and feed on grass roots for most of August.

As temperatures drop in autumn, lawn grubs dig deeper into the soil. The white grubs will overwinter below the frost line in the soil.

In the spring, typically late April or early May lawn grubs move up to shallow soil to feed on grass roots for a very short time. Most of the lawn damage seen in the spring is a result of fall feeding, not spring feeding.

In late spring, the white grubs stop feeding and turn into pupae and at this stage they are resistant to chemical insecticides. In late June or early July, beetles emerge from the pupae and crawl out of the soil, completing the life cycle.

How to Identify Grub Damage in Lawns?

Identification of the symptoms of lawn grub damage is relatively easy and even a non-professional can quickly identify grub damage in a lawn. The easiest method is to go to the damaged area of the lawn and pull on the area of grass that is right next to the damaged area of the lawn. When you pull on the grass blades where the turf is still green, the turf will pull up like a fresh roll of sod. The reason for this is because the grubs eat the roots of the grass within one inch of the surface of the soil.

After it is clear that the lawn has grub damage and the grass roots have been eaten, carefully sift through the top one inch of the soil until you find a White Grub. After you have found grubs in the soil it is easy to conclude that the damage was caused by white grubs. If you cannot find a grub then the lawn may be suffering from a different lawn problem like drought stress or spider mite damage.

White Grubs are not very prevalent in the Front Range of Colorado and since 1997 Organo-Lawn has only seen about 75 instances in lawns. 2015 was the worst year with 25 cases and this increase in activity is due to irrigation in lawns and the increased rains during the egg stage in 2014 and the spring of 2015. 2018 was also a bad year for grubs in Colorado, with about 20 cases reported in our service area. How to Treat a Lawn with Grub Damage

Proper lawn watering is the best preventative treatment of white grubs. The first step in lawn insect control is to evaluate the lawn watering schedule and make sure it is being watering according to the 1-2-3-2-1 lawn watering technique. Grub eggs cannot survive in dry soils, even if the soils is dry for only a day or two.

If it is too late and grubs have been found in a lawn, to kill the larvae we recommend an application of a a special EPA’s Reduced Risk List insecticide called Acelepryn. If the grubs are active we recommend an application of Acelepryn immediately and this typically occurs in the fall from August through October. We also recommend a second application sometime towards the end of April or very early May. During this time of year is when the lawn grubs return to feed on grass roots before they leave the soil. It is important to monitor the lawn and if any signs of another infestation occur then contact Organo-Lawn’s office immediately.

If the lawn grubs killed the grass and the lawn is severely damaged to the point where it cannot recover on its own, we will recommend a top seeding package to reestablish the grass in the lawn.

If you live in the Boulder or Fort Collins area and you believe that your lawn might have grubs, please contact our office to schedule a insect and disease diagnosis or to schedule a lawn grub treatment.

Acelepryn is on the EPA’s reduced risk list and will control grubs for up to 3 months after the grub treatment has been applied to a lawn.

We understand that insect controls can be confusing. If you have any questions about the Japanese beetle grubs or if you want to talk with a lawn care expert please contact our office to answer your tree care questions. Learn More About the Other Insects that Affect Lawns. White grub next to a dime for size reference. White grub damage found in a lawn in Boulder, Colorado. Severe white grub damage in a lawn in Fort Collins.

How to treat lawn grubs without using chemicals?

Lawn grubs can be killed very easily without using any chemicals by allowing the soil in the lawn to dry out during the month of July. Japanese Beetles lay their eggs in the soil of lawns from late June to early July. White grub eggs die quickly from drought stress. It only takes about one or two days of dry soil to kill the grub eggs. Therefore, if the sprinkler system is turned off for about one week during July the grub eggs will die. The lawn may turn brown, but it will recover quickly with three deep watering on three consecutive days. If the lawn is being watered according to the 1-2-3-2-1 lawn watering technique the lawn will have ample time to dry out between lawn watering.

Grubs are also vulnerable to being killed by the beneficial bacteria called Bacillus Thuringiensis or protozoa called Ovavesicula Popilliae. Lawns that have a living soil teaming with microorganism activity, will have the presence of this beneficial bacterium.